Statement on the resignation of Dr Sasa

Health & Hope Myanmar was founded by Dr Sasa in 2008.  Dr Sasa has led the work in Myanmar since its inception, working tirelessly for those who are marginalised. Under his leadership, Health & Hope has pioneered work in rural healthcare, education and food security, in addition to leading relief work across southern Chin State in times of natural disasters.

On 22 February 2021, the Committee Representing the Pyidaungsu Hluttaw (CRPH) announced the appointment of Dr Sasa as their Special Envoy to the United Nations to represent the people of Myanmar. Recognising the importance of supporting the people of his country by representing their views at the highest levels of the international community, Dr Sasa has accepted this role. Accordingly, and with great regret, Dr Sasa has resigned as CEO, and now has no executive role at Health & Hope.

All of us at Health & Hope congratulate Dr Sasa on his new role and wish him every success as he begins his work for the interests of the people of Myanmar internationally.

HHM will be led by Dr Sakie as the newly appointed Chief Executive Officer. In his previous role as deputy Chief Executive Officer, Dr Sakie has led the day-to-day operations in Myanmar since early 2019. The Board of HHUK congratulates Dr Sakie on his new role and looks forward to working with him and his team on Health & Hope’s humanitarian programmes in community healthcare, education and food security for the people of Chin State and beyond. 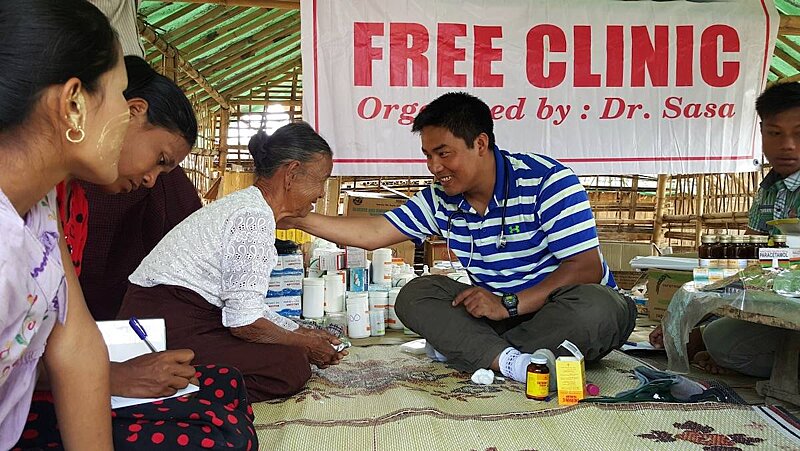 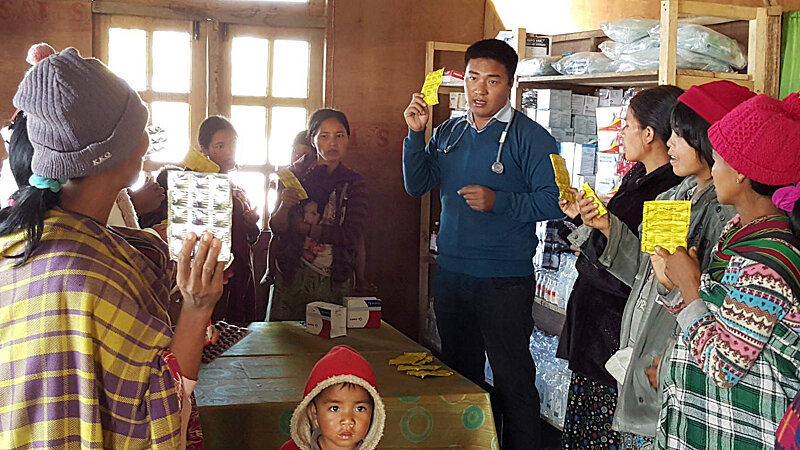 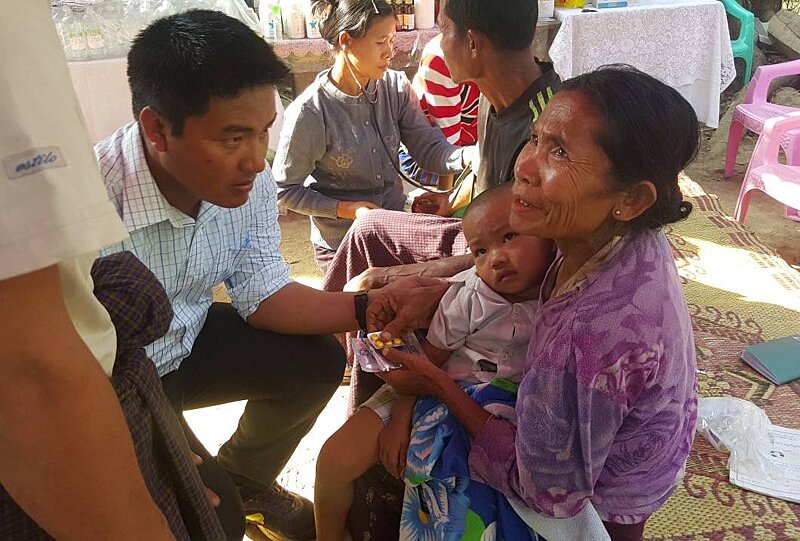 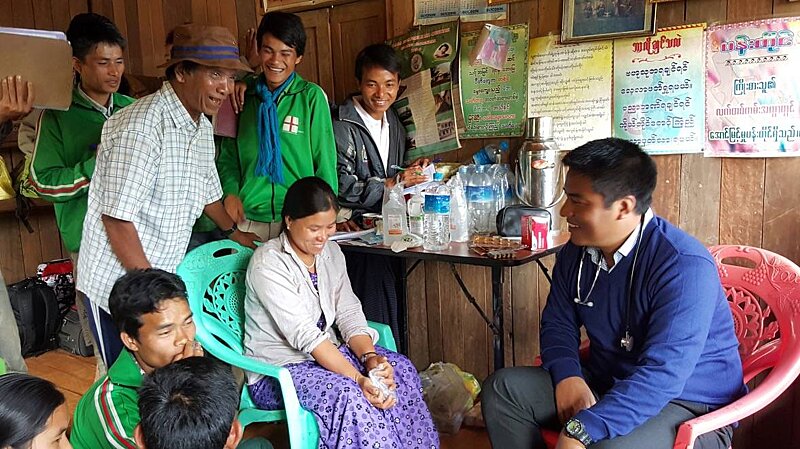 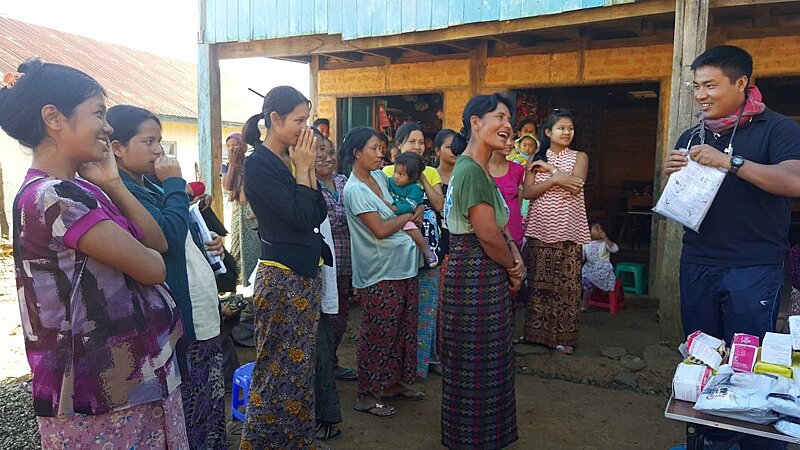 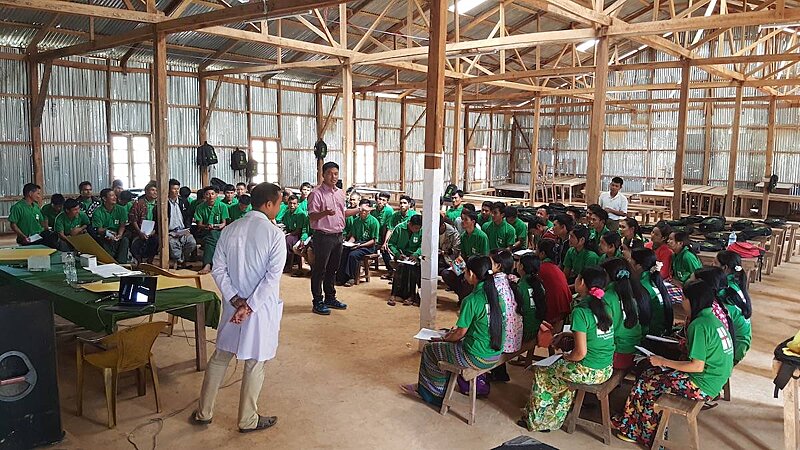 Our Community-Led Healthcare project is now in its third year, and over recent months the team have been working hard to develop and expand the programme.

They have produced some excellent health education resources and videos, which will be used and distributed in the community. The aim of these materials is to address some of the most important health needs villagers face by improving their understanding of general good health practices, with an emphasis on prevention and early detection. These resources will be a central focus for our outreach trips to the 21 target villages planned for this year.

In December the Health & Hope Health Team sent two medical teams into the first four villages. The objectives of this first outreach were to: 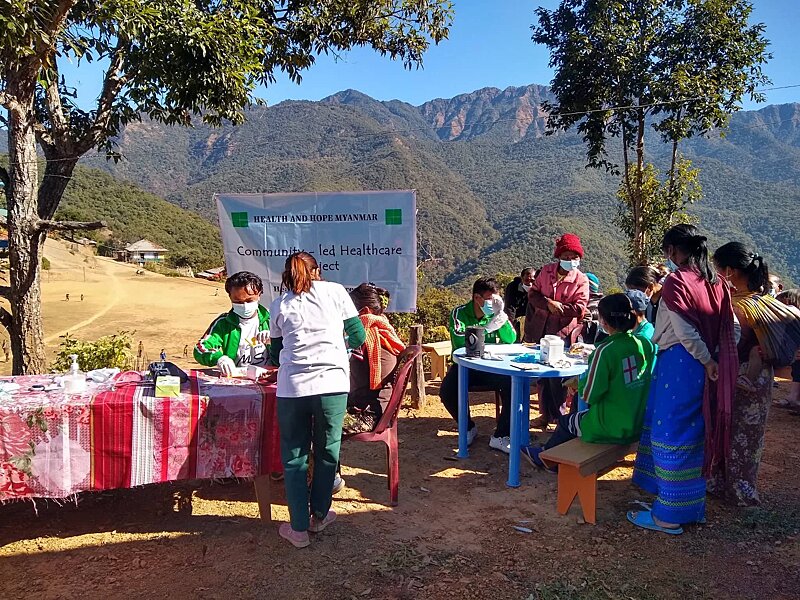 Despite the nationwide restrictions in place due to COVID-19, the team were warmly welcomed by the villagers. The level of hospitality and the generosity shown was a humbling experience for the health team.

The community were fully engaged in every decision making activity, including the selection of CHWs, and keen participants of the health education activities. As a result of the COVID-19 pandemic, many of the villagers were struggling with anxiety and fear when the health team arrived, but this was dramatically reduced during the teams visit. Individuals felt empowered to make changes that would improve their health and benefit not only themselves but others in their family and community too.

The villagers were overwhelmed that they had been chosen to receive such care and love though health education and other activities run by the team. This had never been done in their village before. The health education teaching was a huge success and the villagers were keen to practice their new found knowledge by making immediate changes. One such change was the establishing of designated waste bins in each of the villages to improve sanitation, waste management and protect their environment.

An elderly villager from Shar Oh village said:  “No-one has ever come to stay with us to teach us about healthcare. No-one has ever cared for us enough to teach us how to look after our village health by keeping everywhere clean. We are going to be the cleanest village in Maraland.” 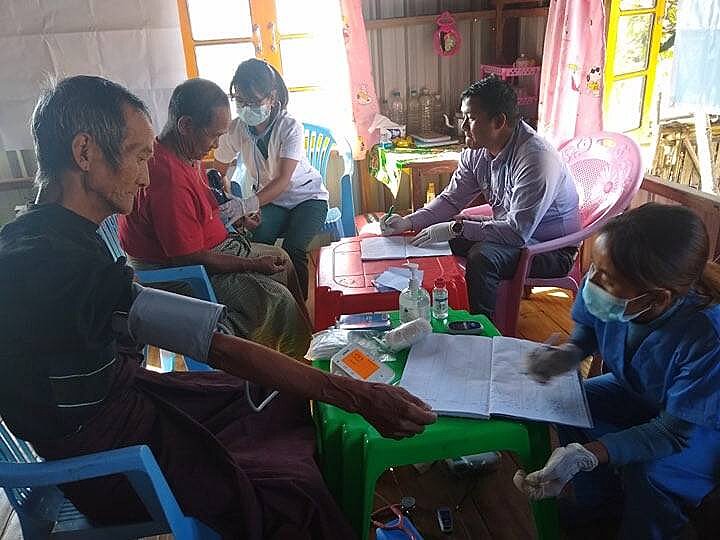 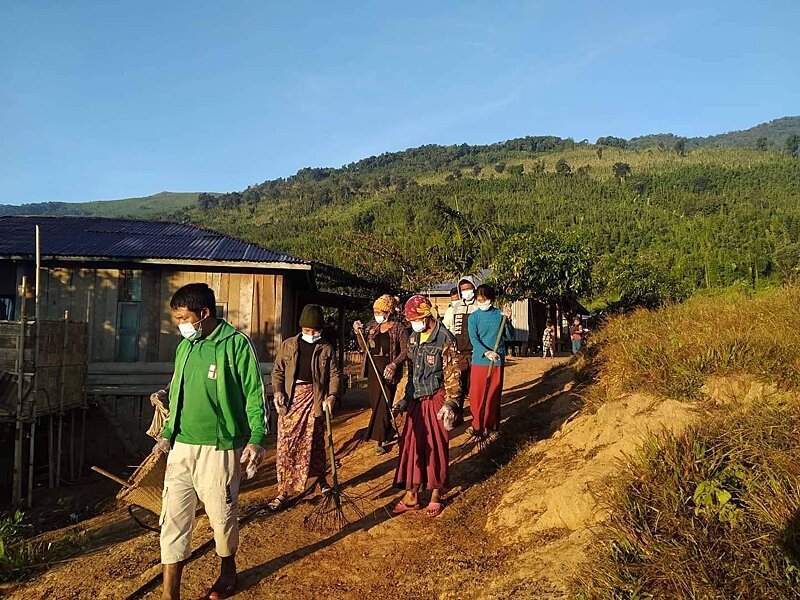 During each village outreach, the Health & Hope Medical Team ran a clinic to screen for non-communicable diseases and to address any immediate health needs. Medical supplies were brought from Hope Clinic in Lailenpi for use and distribution in the community.

The village children were also keen participants in the health education activities. The team had prepared a fun COVID-19 song and dance to be sung whilst washing their hands to encourage good hand hygiene. This proved to be an excellent way to engage them and encourage positive changes across all the ages groups. 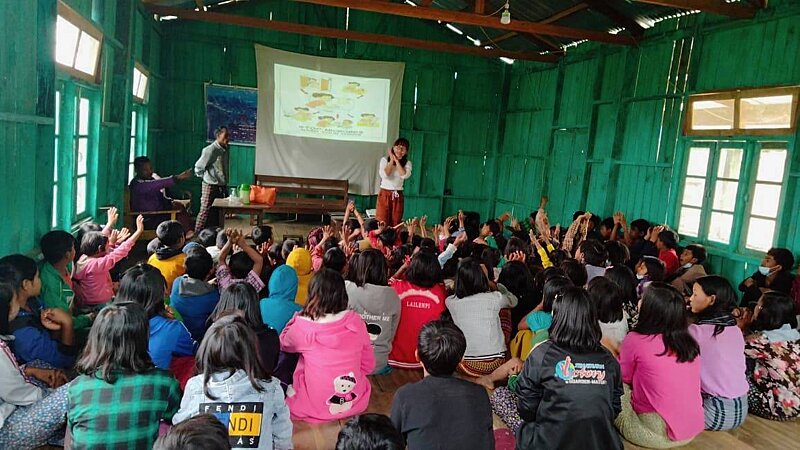 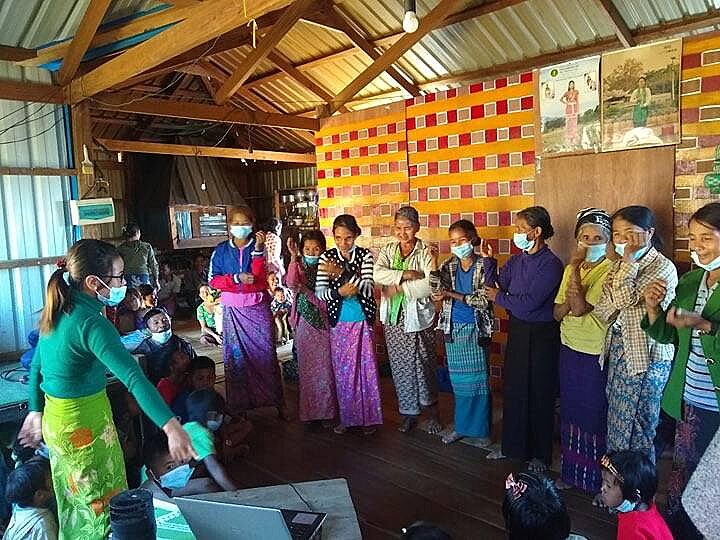 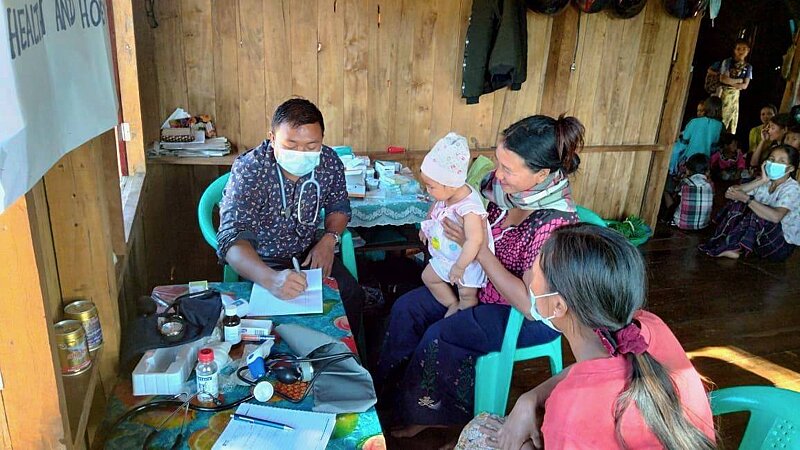 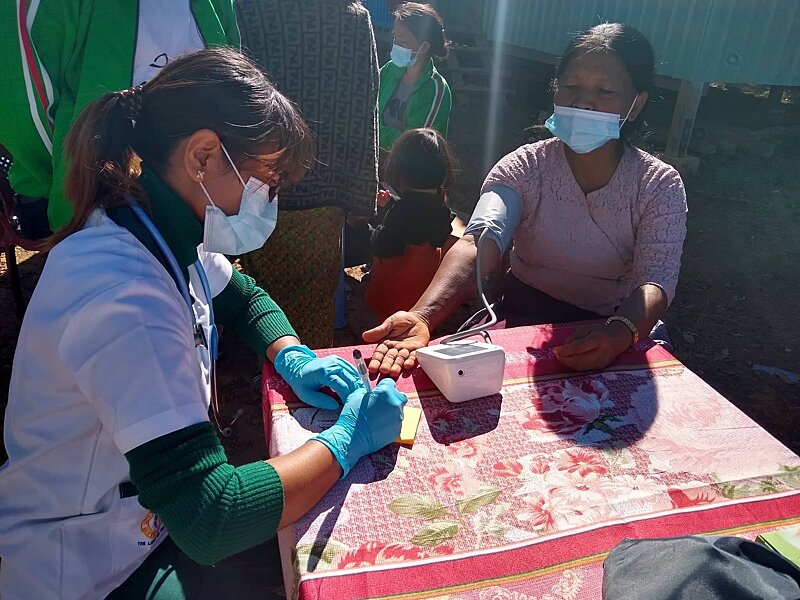 Future plans for the project this year include five further outreach visits and two training workshops to be held in Lailenpi. Despite the current situation in Myanmar our work is continuing, although planned outreach visits have currently been put on hold until we can assess the situation and consider our best strategy for continuing to deliver services on the ground safely.

A collection of beneficiary stories from previous outreach visits can be found here and if you would like to view more photos from the project, check out our Flickr album here.

Our in-country staff are currently safe and well, and will continue to deliver essential services to rural communities as planned after a short break to review security considerations.  The safety of our staff is paramount to us, and as such we will continue to review the conditions to ensure we can work safely, whilst remaining responsive to the needs on the ground.

As a non-political organisation, we stand alongside the people of Myanmar in the hope that a peaceful resolution to the current situation will be found.

Having worked through periods of political uncertainty in the past, we remain resolute in our mission, and will continue to provide non-discriminatory humanitarian aid and development services to those in need.

Some have asked how you can support communities in light of recent events. We are continuing to assess the situation on the ground to identify any short-term needs as they develop. Giving a gift to our general fund will enable us to respond swiftly to these needs as they arise.

Give a financial gift to our work

Especially at this time, we are so grateful for your continued support and partnership.